Microscopy on a Mac! 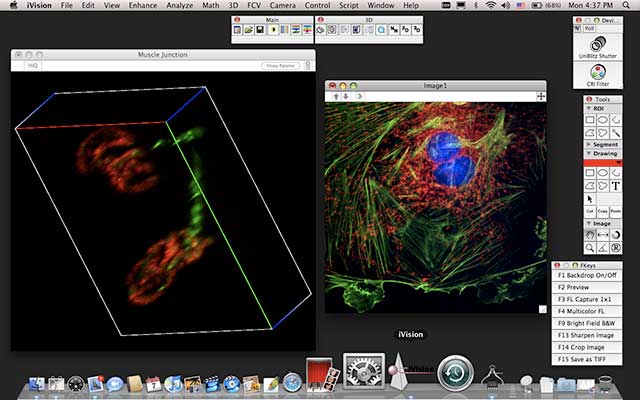 iVision‐Mac is image acquisition, processing, measurement, and analysis software. iVision‐Mac directly supports the acquisition of images and time-lapse series. Sophisticated imaging processes or even simple routines can be automated down to the push of a single button through the use of the intuitive scripting tool. There is no need to learn Visual Basic or other programming languages when you want to automate your imaging routines. Also, fully integrated extensions easily automate microscope control by driving motorized microscope hardware. Our team of scientists and engineers designed iVision‐Mac to include the full set of tools needed to build imaging, analysis, and automated solutions for the laboratory. Free camera controls let you acquire images from any camera we support. Extensions (such as Deconvolution and Motion Control) smoothly integrate new processing, analysis, and hardware control commands into iVision‐Mac. iVision‐Mac is a proven solution worldwide, and can be found in hundreds of citations in the most prestigious journals every year. Since its creation, thousands of scientists have incorporated iVision‐Mac into their research.

iVision‐Mac includes a full suite of image processing features and tools. Not only do these tools allow you to enhance image quality when necessary, but they also make it easy to analyze the image by separating objects or areas of interest from the background. With iVision‐Mac, you can easily combine multiple image sequences and readily blend grayscale (e.g. DIC) images with fluorescence image sequences. iVision‐Mac also gives you the ability to process and visualize 3D images with the included 3D extension. The 3D visualization tool renders sequences of images in the X or Y plane, or in a tumble mode. You can pseudocolor the rendered image for enhanced image visualization.

Using spatially calibrated images with the automated measurement tools, scientists can quickly and easily perform dozens of image processing tasks. The resulting data can be saved in iVision‐Mac, or opened in a spreadsheet program such as Microsoft® Excel® for further analysis. User definable plots and histograms are also included to present the data as desired. iVision‐Mac also includes densitometry measurements that can be used to plot an analysis such as mean intensity over time. iVision‐Mac supports the measurement of individual objects, regions of interest, and entire images. iVision‐Mac performs batch analysis of images and sequences using file lists and indexed files.

iVision‐Mac is a trademark of BioVision Technologies, Inc, Exton, PA.

The Image Tools allow one to scroll across an image that does not fit within its window, to adjust the magnification of the pixels in the image window, to measure lengths or angles, to rotate the color tables on indexed color images, and to set registration marks used for image registration.

Here is an example of a typical function key palette. The function keys run scripts for display of the camera's view of the specimen, capture of images using fluorescence microscopy or brightfield microscopy, enhancement of the image, cropping unneeded data, and saving the results to disk.

iVision‐Mac provides a point‐and‐click interface for control of imaging‐related hardware. The position of devices such as filter wheels, X-Y stages and Z-axis focus drives can be displayed and may be altered.

The Region of Interest tools allow the selection of the area within an image for processing, filtering or quantifying. The defined region of interest may be a rectangle, an oval, a polygon, a shape drawn freehand or a shape defined by the segments as defined by automated segmentation or by manual use of iVision‐Mac Segment Tools.

The Segment tools define areas to be measured. iVision‐Mac allows the creation of as many as nine segments in each image window, and can measure the segments individually.

These tools define segments as rectangles, ovals, polygons, lines, or areas defined with a paintbrush. A Cut tool allows the separation of objects that are clumped together, allowing iVision‐Mac to count the objects as individuals.

These tools define drawing objects as rectangles, ovals, polygons, lines, shapes drawn freehand, or text annotations. Each drawing on the drawing overlay is an individual object, and may be treated without affecting other drawing objects present.

The 3D Tools provide easy access to common operations on sequences of two‐dimensional data sets that are loaded into image windows:

Viewing a multi‐frame stack as a volume in 3‐D space, rotating it in any direction by grabbing it with the mouse;

Viewing one of the frames of the stack as an image;

Constructing a single‐image in-focus view of a stack of frames that were acquired at different positions along the Z‐axis;

Synthesis of a two‐dimensional image of the data in the entire stack;

Creation of a sequence of 3‐D projections through the data set, representing views from positions at regular intervals around the stack’s X‐axis or its Y‐axis;

Creation of a QuickTime™ movie from the frames in an an image window;

No Neighbor deconvolution that is based on a theoretical point spread function;

Deconvolution, each resulting frame using information from data set planes as dictated by a theoretical point spread function or one sampled from the microscope that acquired the original data.

QuickTime is a trademark of Apple, Inc., Cupertino, CA.

iVision‐Mac is a trademark of BioVision Technologies, Inc, Exton, PA.

This Mac has no expansion slots built in. Any interface board must be plugged into an external card cage that attaches to one of the Mac’s Thunderbolt ports, and the manufacturer must provide drivers tested for use when connected via Thunderbolt.

Apple sells a Thunderbolt to FireWire Adapter through which one can attach a FireWire-based (IEEE 1394) camera.

Contact BioVision regarding use of this computer for image acquisition.

Other models of Mac Pro

Mac Pros are equipped with ‘PCI Express’ expansion slots which are not compatible with ‘PCI’ interface boards. They include FireWire ports and can control FireWire-based (IEEE 1394) cameras and PCI Express interface cards;.

Contact BioVision Technologies regarding use of a Mac Pro computer for image acquisition.

This Mac is equipped with ‘PCI Express’ expansion slots which are not compatible with ‘PCI’ interface boards. It includes FireWire ports and can control FireWire-based (IEEE 1394) cameras.

Contact BioVision Technologies regarding use of this computer for image acquisition.

Other models of Power Mac G5

These Macs require PCI cards that operate at 3.3 Volts. Most camera cards made prior to 2004 operate at 5 Volts and can not be plugged into a Power Mac G5. ‘Universal PCI’ cards that work with both 3.3 and 5 volt slots are available from the following manufacturers for use in these G5 Macs and older machines:

For more information on specific Apple computers visit Apple's website.
Contact us for help determining if your computer can run iVision-Mac

Recommendations for adding RS-232 serial ports to a Mac are available.

Most Macs lack a built-in serial port, so you will need a USB–to–RS‐232 adapter to add a port with a DB‐9 or DE‐9 connector. We recommend adapters based on chips manufactured by Future Technology Devices International (also known as “FTDI”). Such adapters are widely used and are available from multiple manufacturers; please contact BioVision Technologies for specifics.

The iVision‐Mac 4.5 Upgrade from BD™ IPLab on MacOS 9

A Path to Current Macs

iVision‐Mac 4.5 offers a path to current Macs running OS X for users running Version 3.6 of BD IPLab imaging software under MacOS 9. It is a Carbon application that can control all supported cameras that have OS X drivers. It can also control supported motorized microscopes and microscopy hardware.

Upgrading to iVision‐Mac 4.5 will provide access to a number of improvements and additions made since the release of IPLab 3.6.

This command makes it easy to capture multi-mode images in 3‐D. You may select from multiple filter positions and two shutters to grab fluorescence and brightfield sequences.

Within the live preview window, you can now change camera settings such as offset, gain, and electronic gain. You can also set the normalization (display contrast) parameters during the preview to match your preferences.

Within the live preview window, you can now change camera settings such as offset, gain, and electronic gain. You can also set the normalization (display contrast) parameters during the preview to match your preferences.

iVision‐Mac can now store multiple file sets for “indexed files” and “file lists” used in more demanding automated applications. There are two kinds of file sets: File Set commands have been significantly updated to provide more functionality. Dialogs with File Set menus in them also have a “Show” button that will open the current File Set’s folder in the OS X Finder.

The Export Measurements to File command writes a text file and opens it in the application specified via the iVision‐Mac Preferences command.

Microsoft Excel reopens an open text file when iVision‐Mac updates it via Export Measurements to File.

To complement the new file handling commands, new loop control commands have been added to the script window. These allow you to loop (and exit from the loop) on conditions other than just a count.

Variables can now contain string values.
Variables may appear in window name fields of commands, in the Draw Text command’s text, and in fields within the dialogs Enter Variables, Script Query, and Script Alert.

A movie player control dialog appears when you play back sequences of data. Multiple sequences can be animated at once. Animations now run continuously once started (even while you go on to do other things).

The iVision‐Mac 4.5 User Folder stores scripts, images, and preferences. Each OS X user on the machine has such a folder, which is located within the user's Home folder. No longer will you have to worry about other users changing your preferences, macros (scripts), or settings. Your data and your setup are now your own.

iVision–Mac 4.0 opens and converts scripts from versions 3.5 and 3.6 of IPLab/Mac, but some editing may be necessary: a number of old file-related commands cannot be converted.

iVision–Mac 4.0 imports stored information from your existing IPLab/Mac 3.6 application, such as your X‐Y calibrations, linear filters and pseudocolor tables. Place a copy of your Command Data file from IPLab/Mac 3.6 in the iVision Preferences folder (within your iVision 4.0 User Folder), and launch iVision‐Mac to convert it.